Video connection is an option for synchronous conversation between a bank customer and the bank employee. Such type of connections gives a sense of real face-to-face conversation, the human touch in a digital world.  Thanks to a real-time conversation, the matter can be resolved faster, and the customer can easily explain the case which needs to […]

Video connection is an option for synchronous conversation between a bank customer and the bank employee. Such type of connections gives a sense of real face-to-face conversation, the human touch in a digital world.
Thanks to a real-time conversation, the matter can be resolved faster, and the customer can easily explain the case which needs to be processed.
In addition, thanks to the possibility of viewing the other side of the conversation, some processes during which the client must provide a view of the document, or the employee must certify the compliance of the person with the document, is also possible.

As the video call is a synchronous call, when the system is in the process of allocating an available agent, or when the client will have to wait sometime for the agent to be released, the client will be presented with a waiting screen view, on which the client will be informed about waiting for connection agent, and the predefined information that the call will be recorded may also be placed. The customer will be able to prepare for the conversation by adequately setting the condition of the devices.

Depending on the setting in the system administration, there are two setting options for receiving video calls by an Agent in the LiveBank app:

Manual pickup. Video calls are assigned by the routing system to a logged-in agent in the status available for conversation, they appear in the Conversation module on the In Progress tab. The agent sees the assigned conversation indicator.

Additional options, such as the chat panel or customer data, can be called up or hidden at any given time. During the video, while using the chat panel both parts can send messages, files, and links or Agent can use a Canned Responses function and screensharing.

After starting, the image of the selected element is transferred to the client’s application in exchange for a preview from the agent’s webcam. The agent still sees the video from the client and sees the split image in return for his preview.

The sharing process can be completed by the Agent through the options in the LiveBank app or through the native browser functions.

The agent in the Conversations module for ongoing video calls has two options for ending the call: “Close video call” and “Move to ended”:

Close the video call – ends only the video part of the call, changes the visual layer in the application, and goes to the chat view. The conversation is continued on the chat channel until the Agent decides to disconnect completely and move the tick to finished.

The customer has the option to disconnect the video call by selecting the Disconnect option and after confirmation, the video part of the call ends for both sides, the visual layer in the application changes and goes to the chat view. The conversation continues in the chat channel until the Agent decides to disconnect completely and transfer the task to Ended.

Skill group’s main goal is, as the name suggests, to group agents with the same skills or handle the same type of calls in one system object. The skill group object contains many parameters that determines how the conversations are routed and to which agent. The main parameter is “Case type”, the Admin user can […] 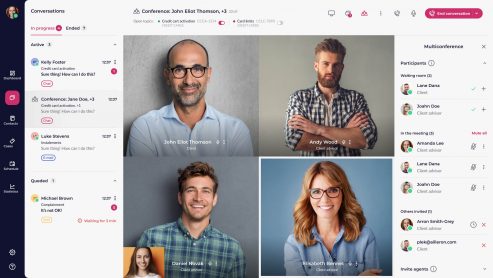 This website uses cookies and similar technologies for the purposes of analysis, improving functionality and marketing. Rules for applying the above solutions can be found in the Privacy Policy. Some of the technologies we use are used to ensure the proper functioning of the site, as well as improve its usability - you can object to the use of such technologies using your browser settings, which may, however, negatively affect how the site will work. Some of the technologies (provided by Google, Facebook and LinkedIn) forward the data collected about you to third parties, including for the purpose of analyzing and improving the functioning of the website or for marketing purposes - by clicking "I agree" you agree to the use of these technologies.
I agreeI do not agreeSettings
Manage consent